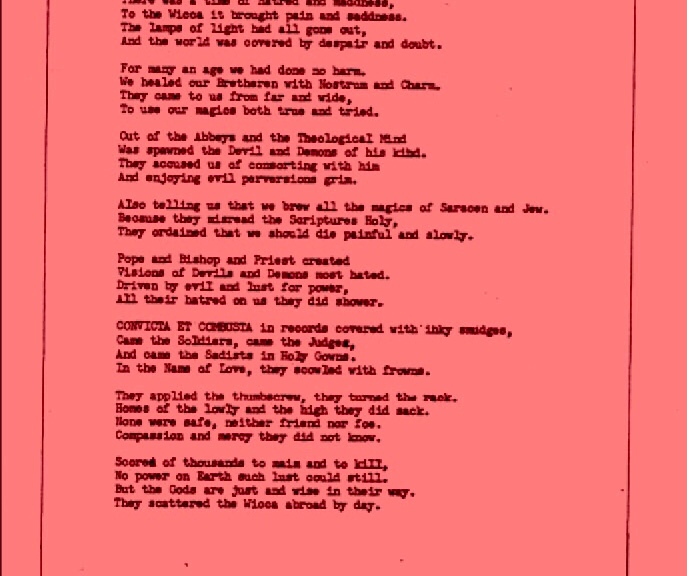 If you need to catch up and just joining us now to read through “Tales from a Witch’s Hearthfire” – click here to view the pages and sections of the book.

This in no way means that we are trying to say that our tradition goes back to Medieval Times or any fantastical claims that many have tried to put out there over the years, but instead, we carry on in the same spirit of those that are cast off by the power elite and we think for ourselves. We have little time for ego-tripping and self-appointed magical authority. Though, we are here to offer friendship and kinship to others on the path – whether you ascribe to any or none of our methods, and regardless of your tradition or previous religious affiliations. You are not given initiation, you earn initiation by completion of the ordeals. Patience and understanding is emphasized along with a mistrust of the power hungry.

The “Bell, Book & Candle” part is very symbolic of this, which is part of the old Church’s Excommunication Rite in which the Bell is rung, the candle is snuffed out on the name and the book slammed shut. By use of this moniker, we are saying that, yes, we acknowledge this.

The word “Wicca” and “Wicce” are the Old English terms for sorcerer and sorceress, or male witch and female witch respectively. At the Wolfa Coven, we tend to look for the universal truths that are found worldwide. Traditions and cultures who have like-practices, all over the world, are kin-traditions.

If they believe in some form of Supreme Being or Universal Source of Power and hold Reincarnation as a Tenet of their religion … and also believe in the power of magic – the manipulation of terrestrial and cosmic forces that can be shaped by the mental gymnastics of the mind of the operator – they are kin to us. No matter where they may be found, or the traditional or cultural name they operate under, they do in fact share belief and practice that matches us and no doubt we could find common ground.

It is common for many folks to draw lines in the sand based on the things that do not matter. The things that divide us then become more important than our similarities.

But one area in which we all seem to find common ground is when a practitioner of magic is persecuted for the simple fact of the religion or practice they hold dear.

While in our modern Western World, many of the legends and tales as shared by the “Years of Wrath & Death by Fire” are behind us, but many places in this world you can still be put to death for the practice of sorcery and fortune-telling.

If you have sat at the Hearthfire of any Elder Witch, you have probably heard at least one tale of how they have been personally judged or persecuted for just being who they are – a Witch. You maybe have also heard many a tale of how others they have known have been judged for it too – including stories of even how family members have turned their backs on them. This still does happen many times in our modern times.

We still have a long way to go before we enter the “Age of Aquarius” in which a religion such as ours will play an elevated role in society. Our practice is not just a religion of the day; but has the potential to have a greater impact in the Age of Aquarius if we continue to evolve and adapt at time and age demands.

In today’s Western World, less people despise us than at the time when this was written, and some of Wicca has entered parts of the mainstream. That still doesn’t mean we don’t have a ways to go – many folks are still within the closet and must stay secret.

Didn’t someone once say the only thing constant is Change?

Below you will find the legend and tale by the Hearthfire, as told by an Elder, Tarostar V* in 1984, in the conservative 1980s….

All text is copyright 1984 by Rollin G. Bennien, filed at the Library of Congress and printed here with permission: